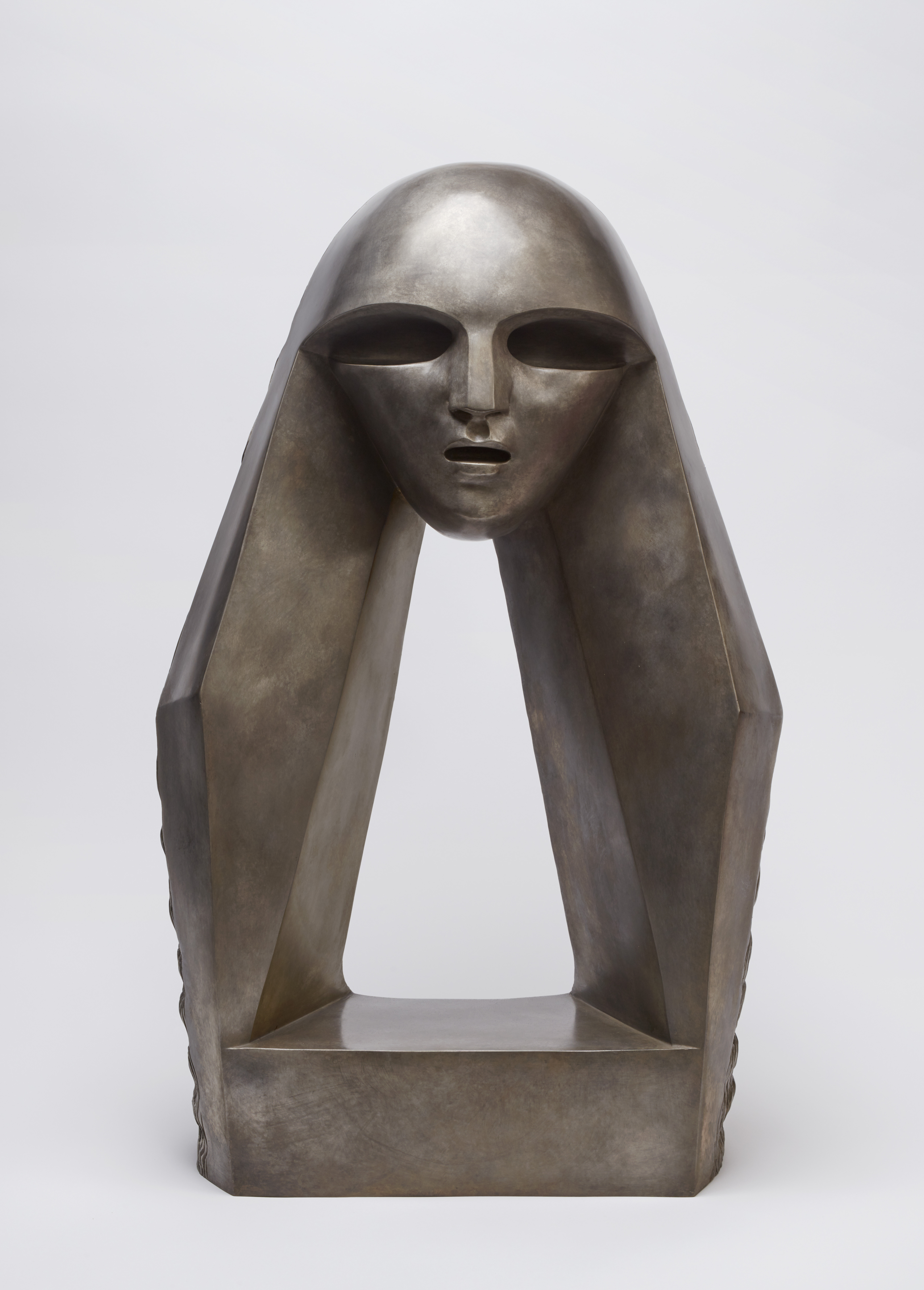 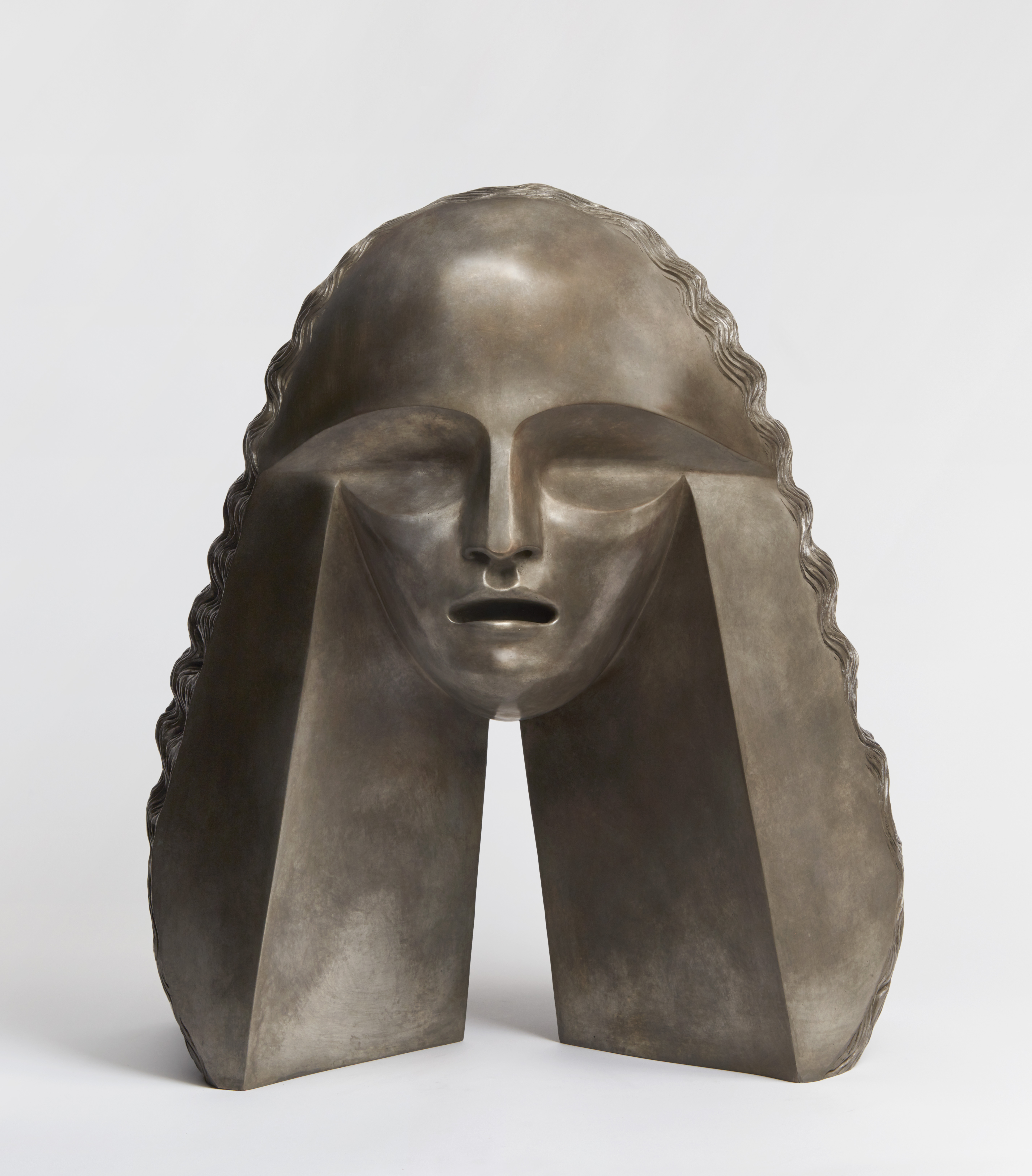 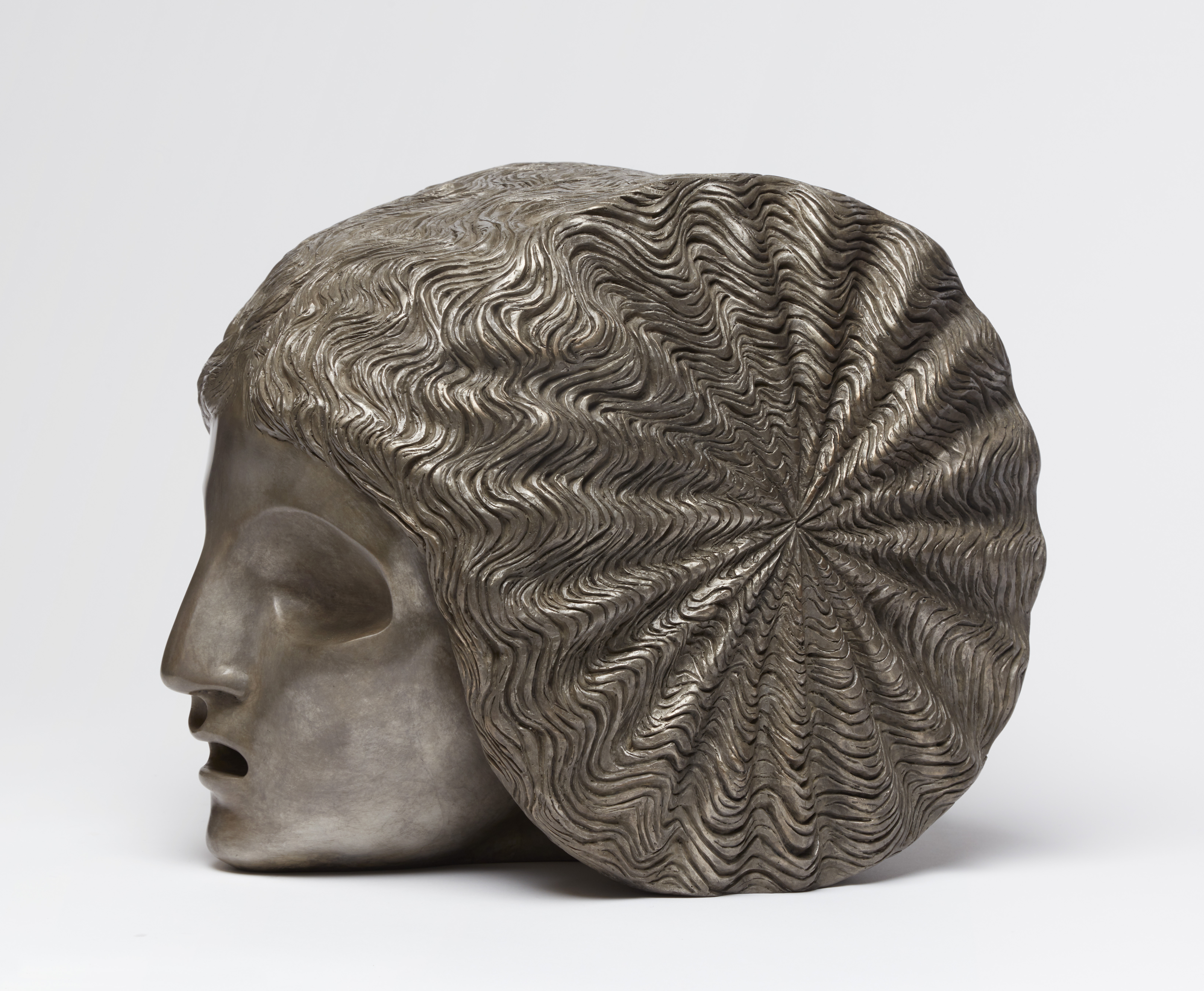 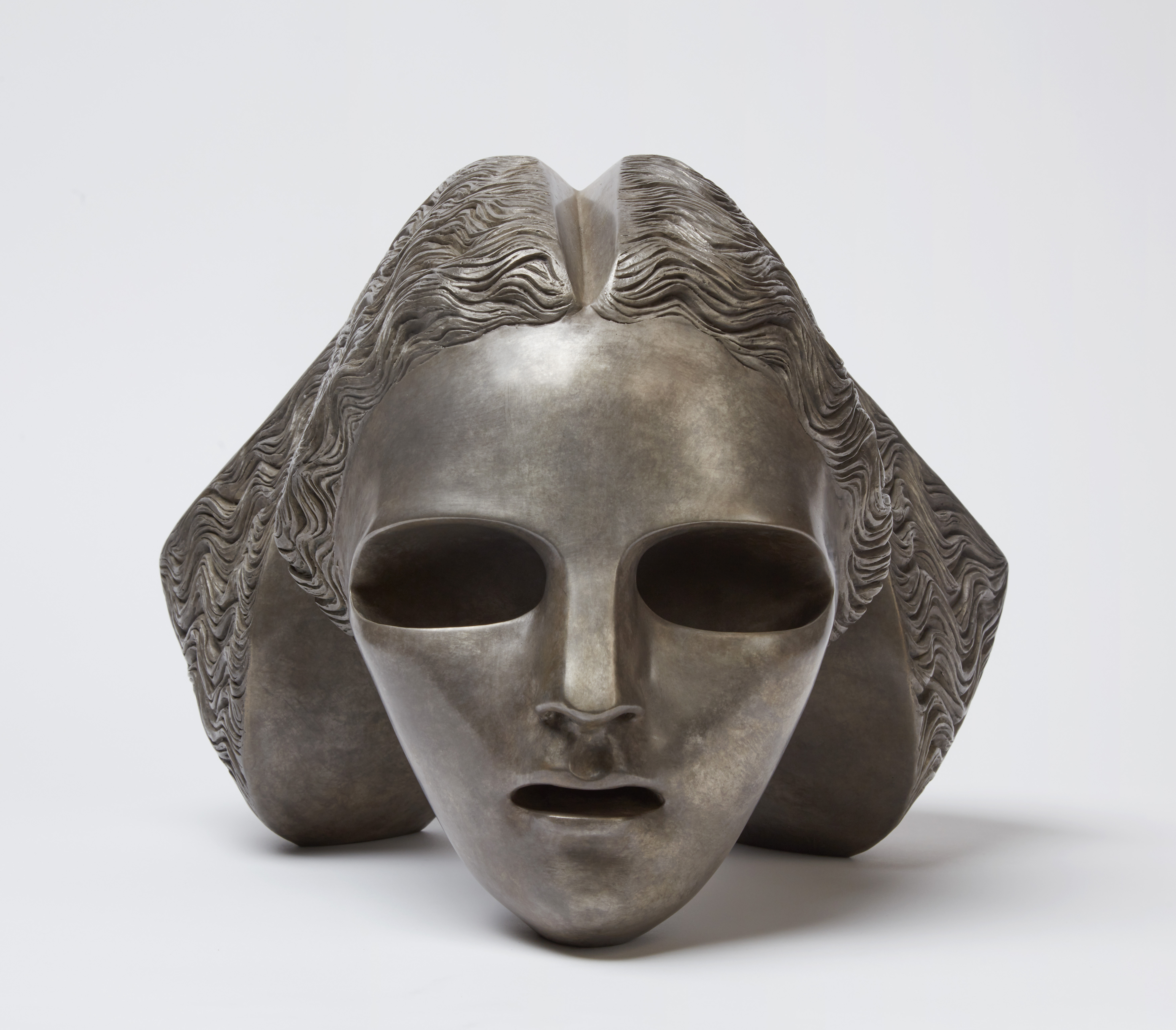 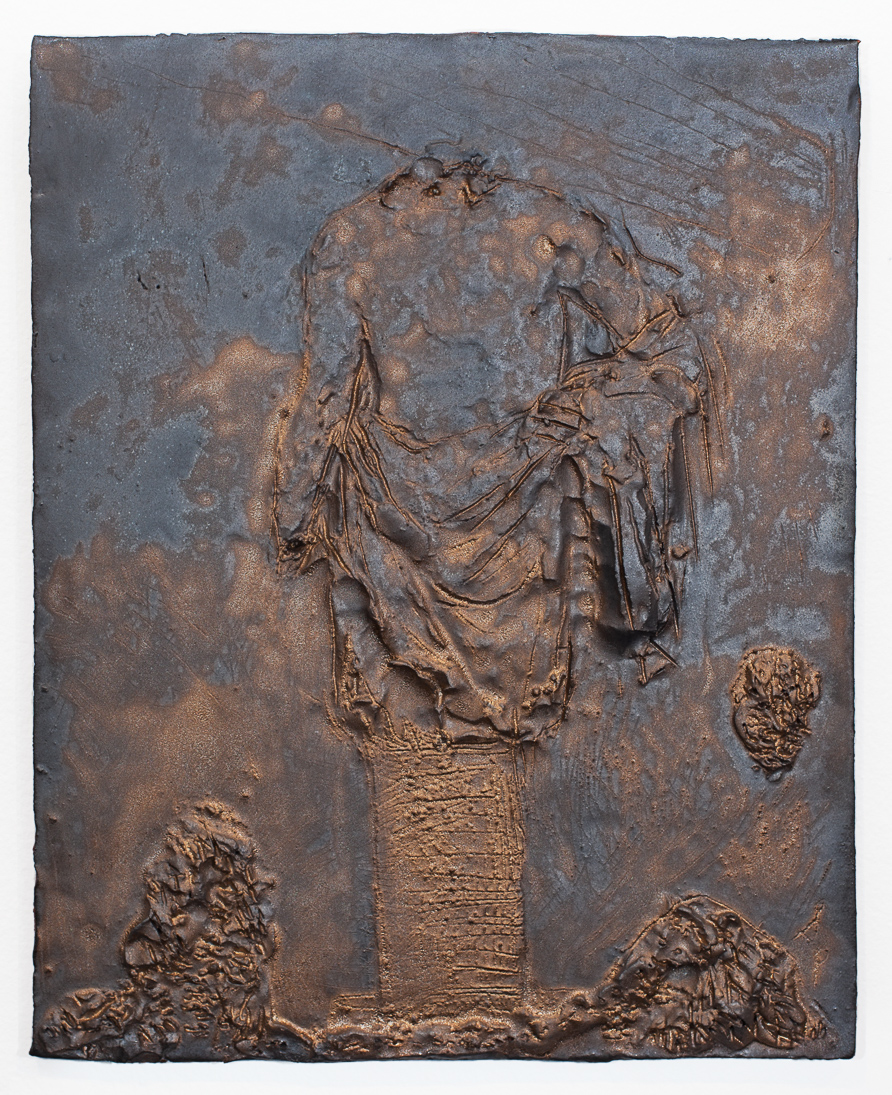 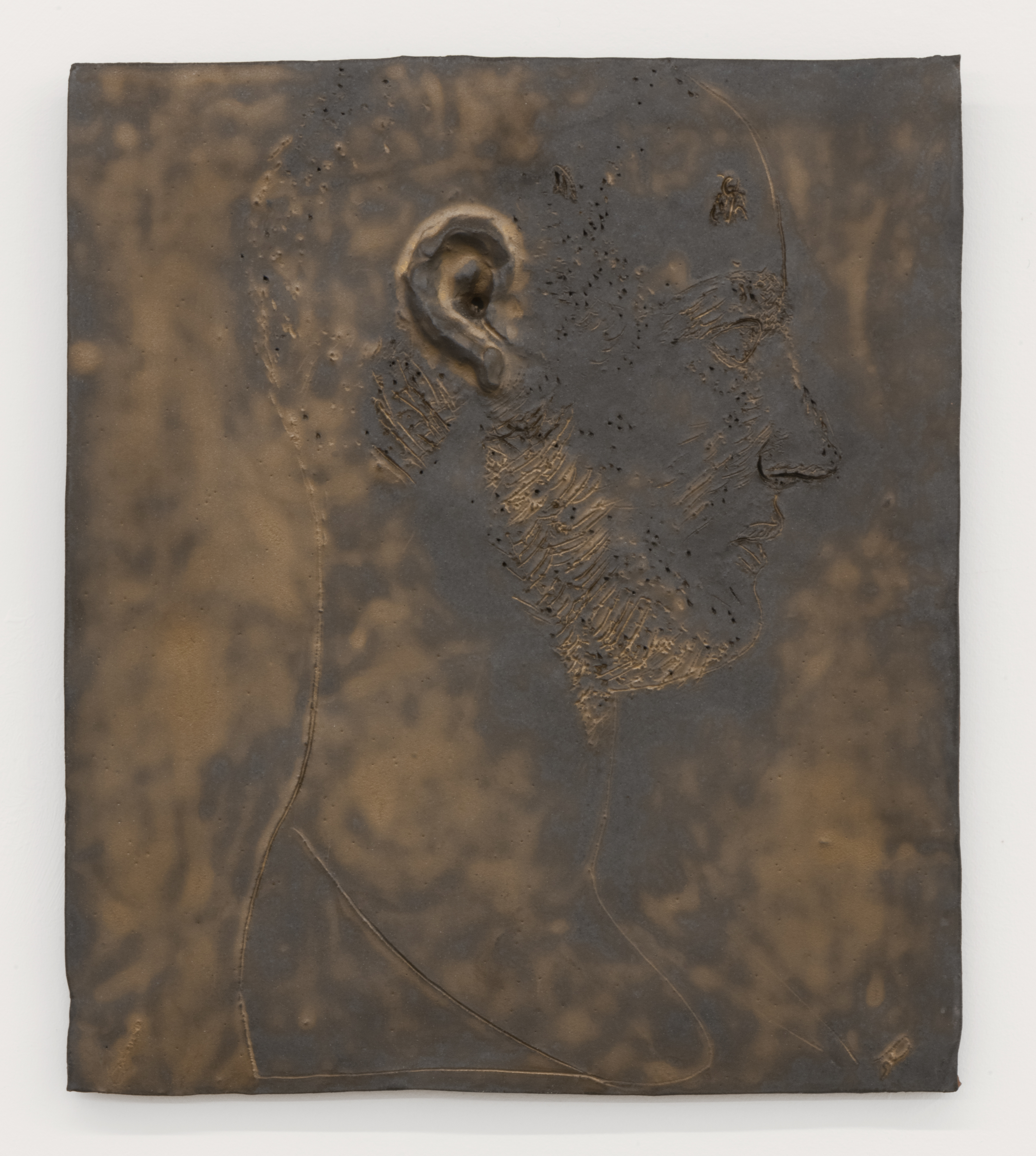 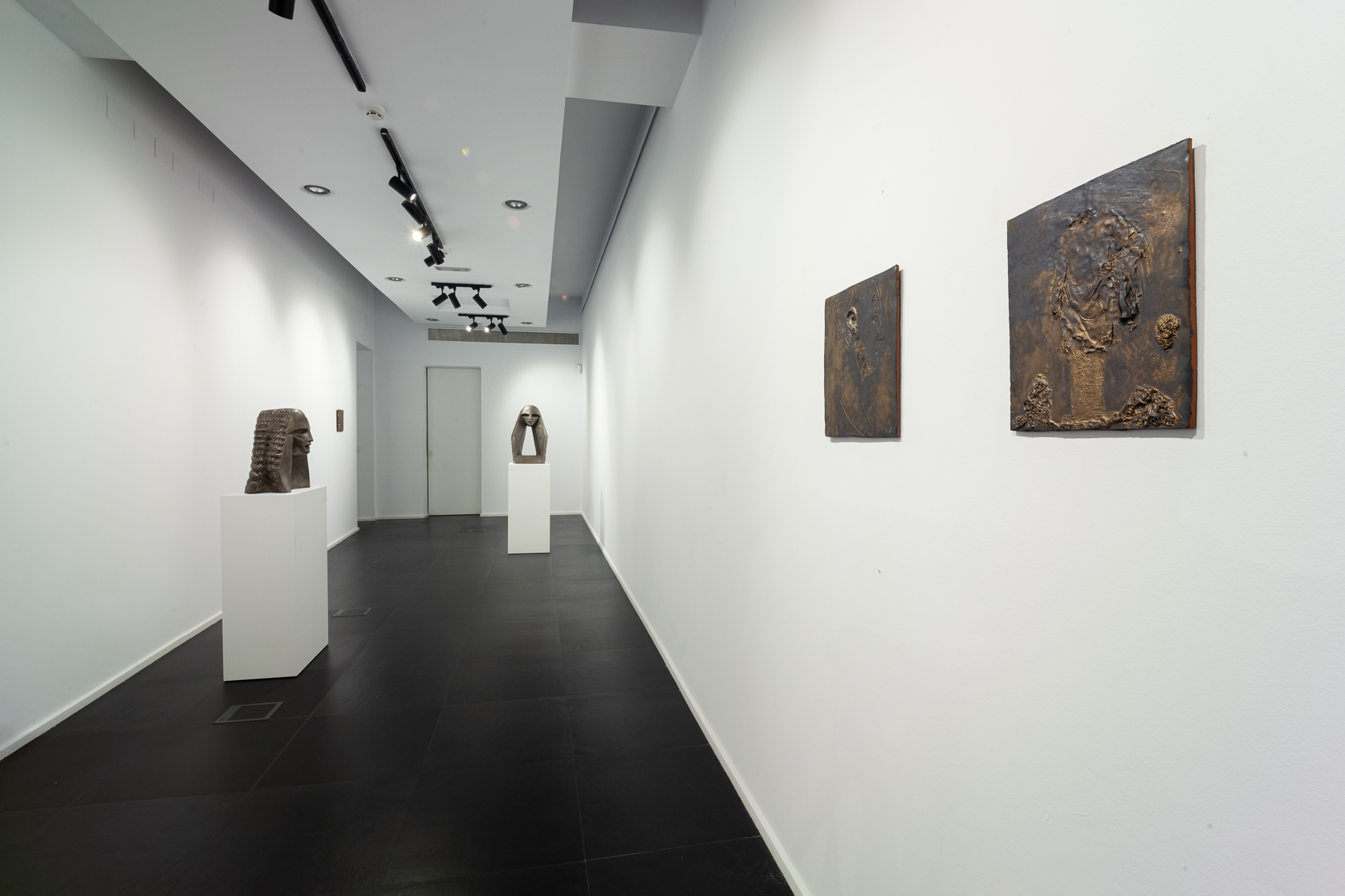 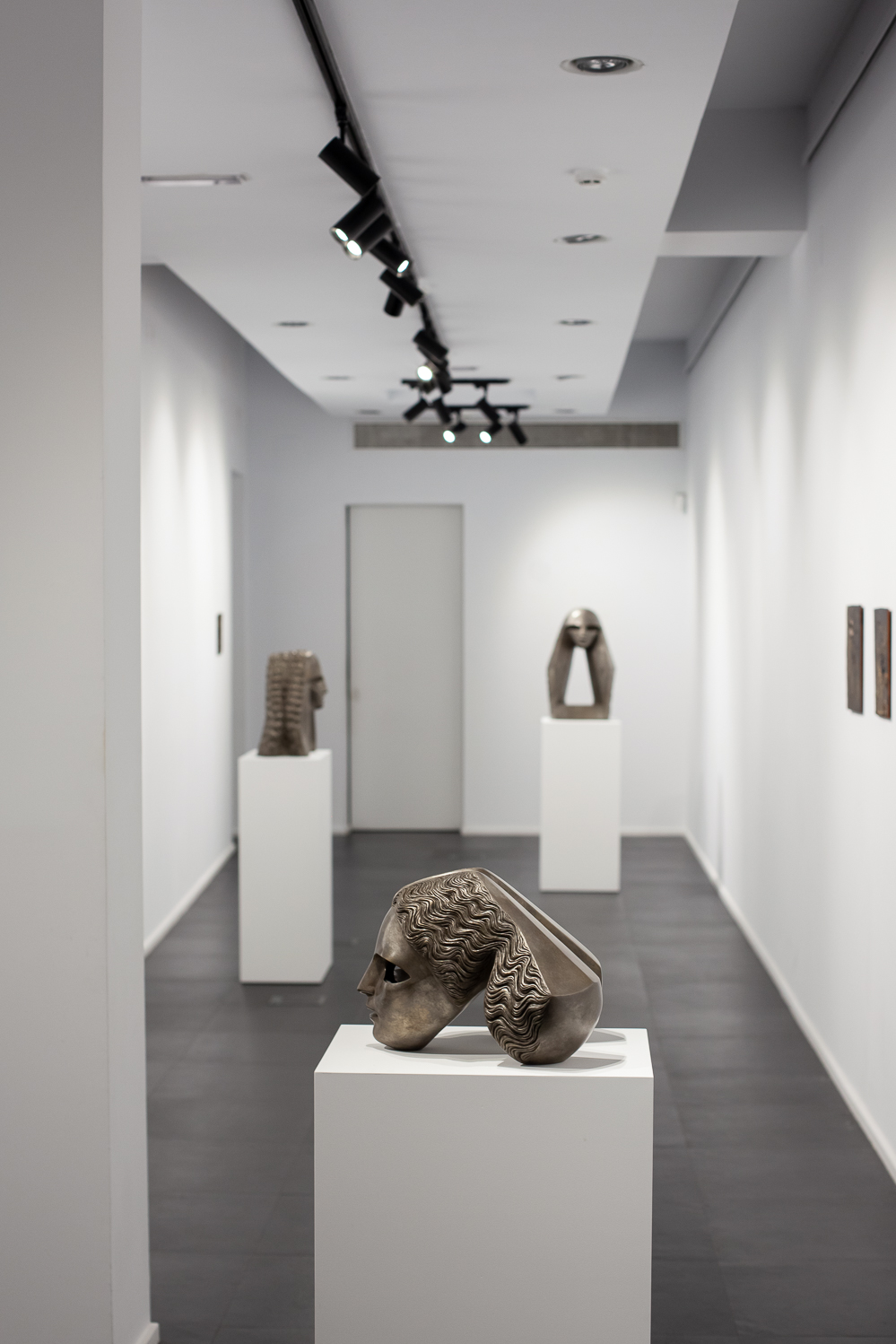 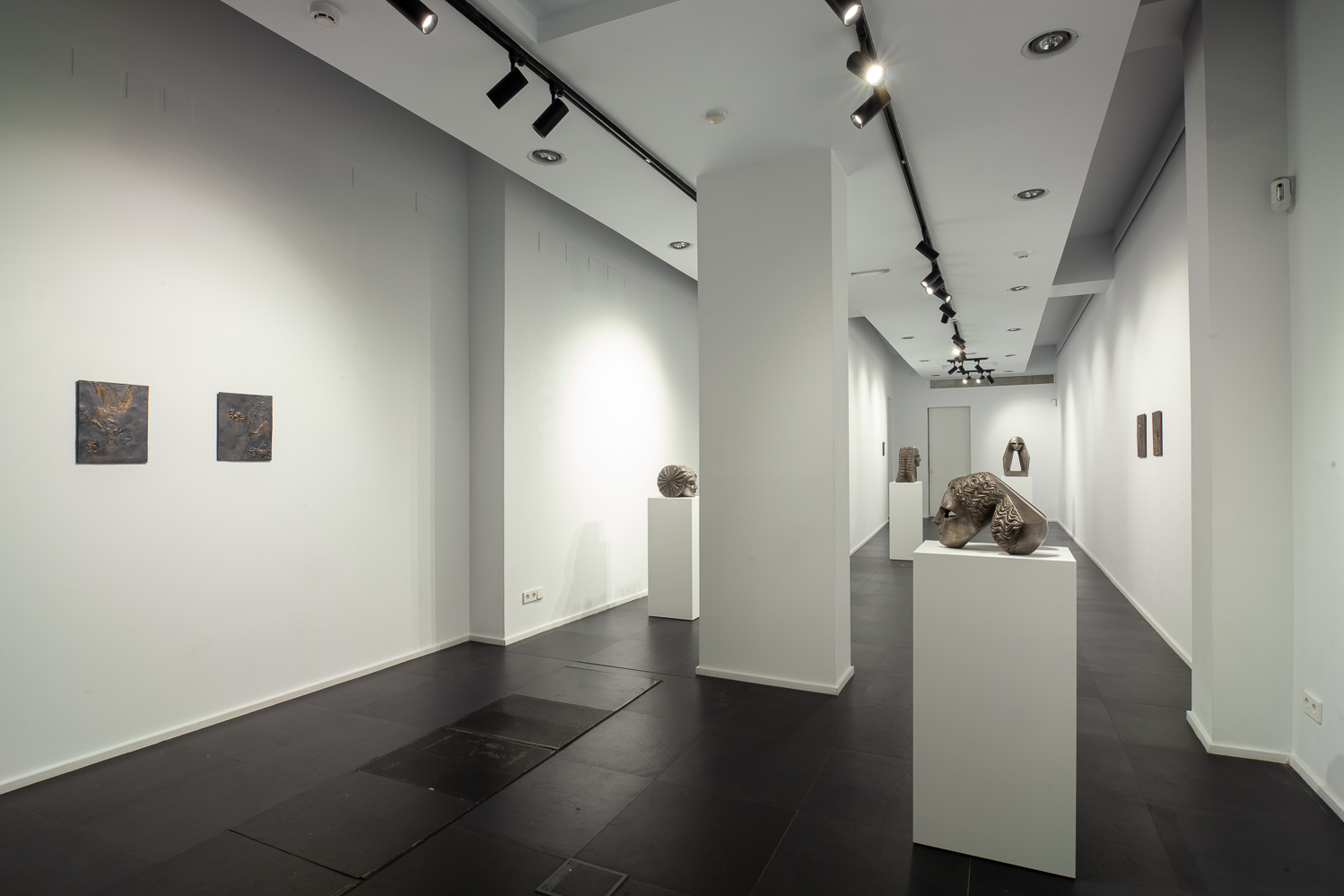 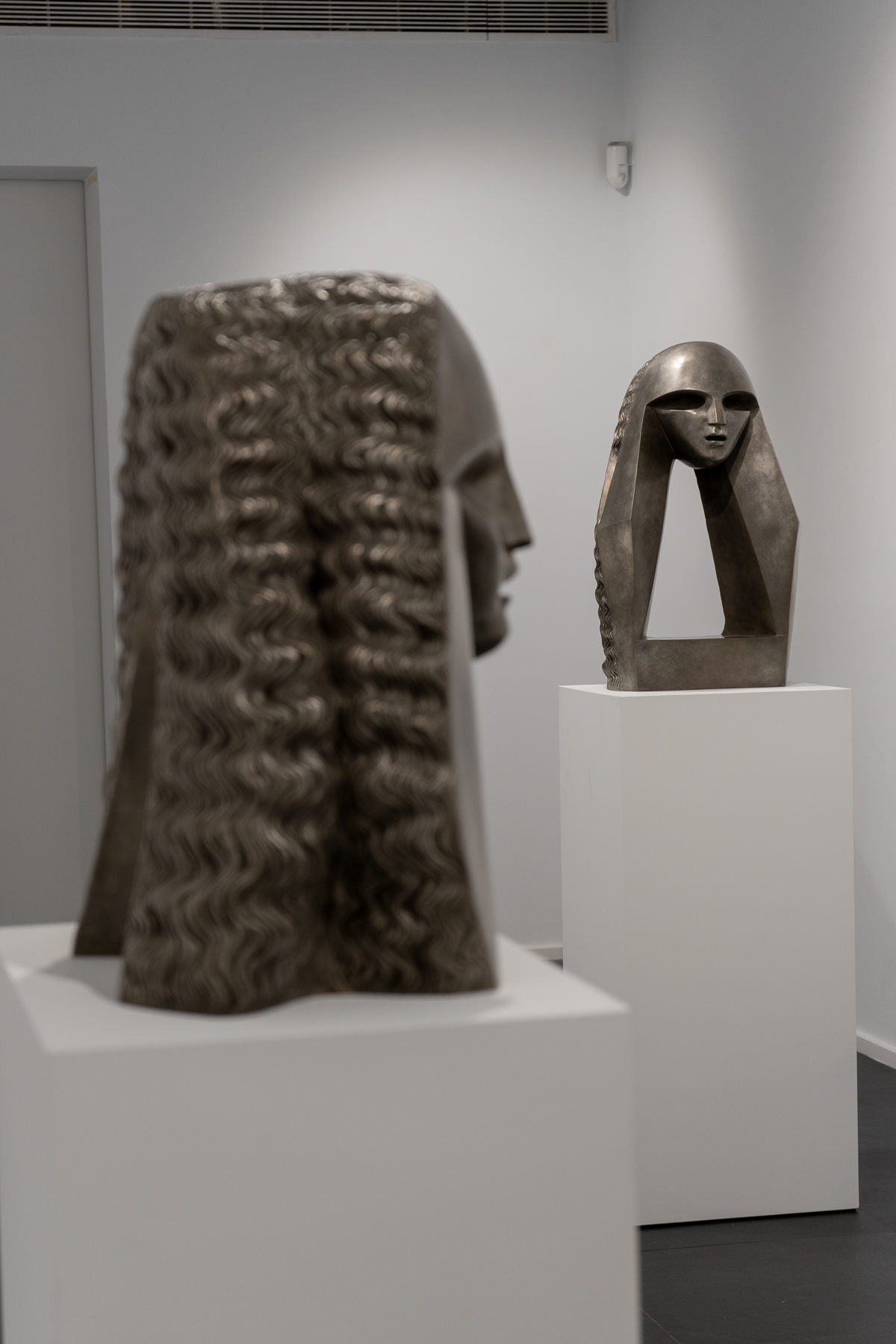 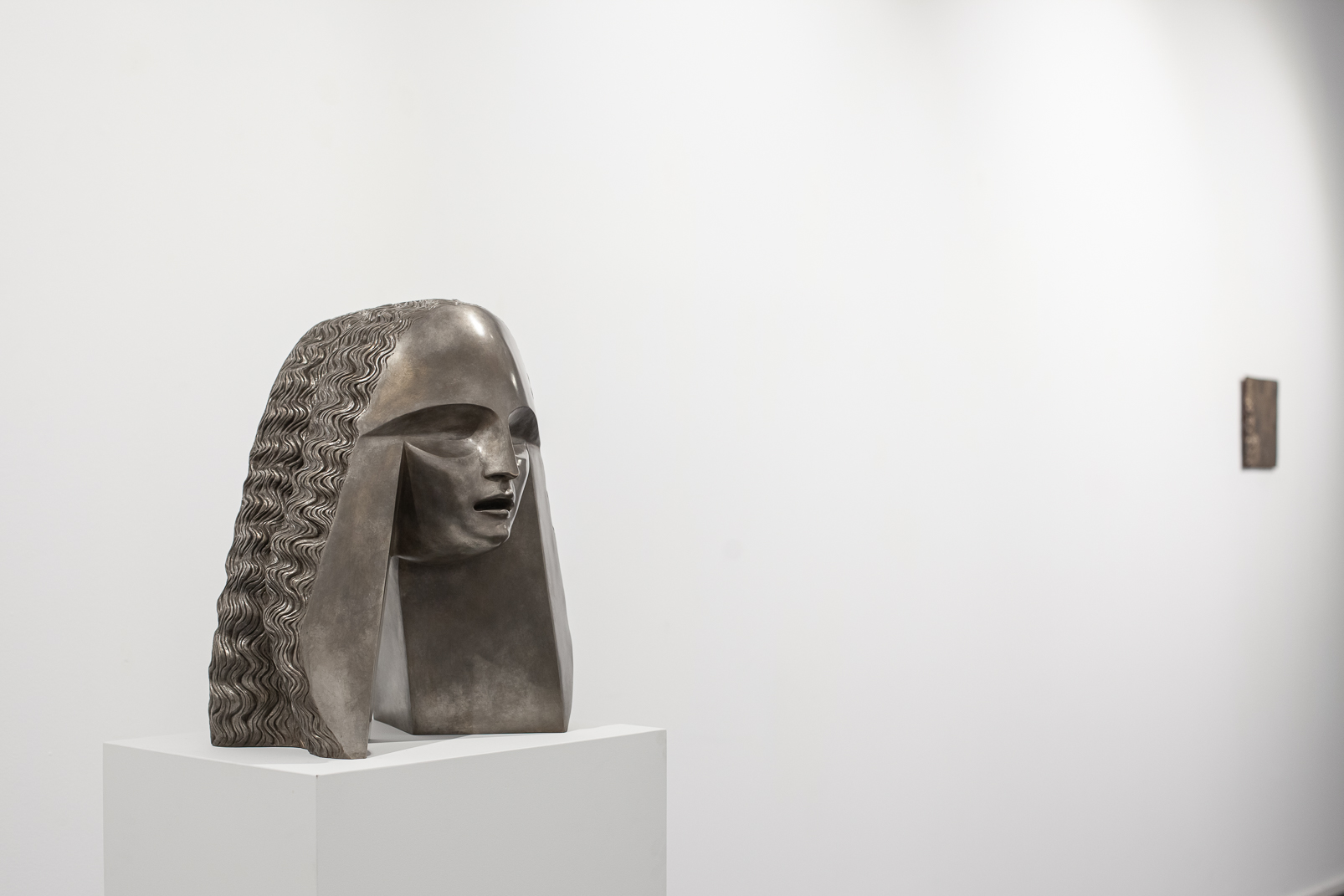 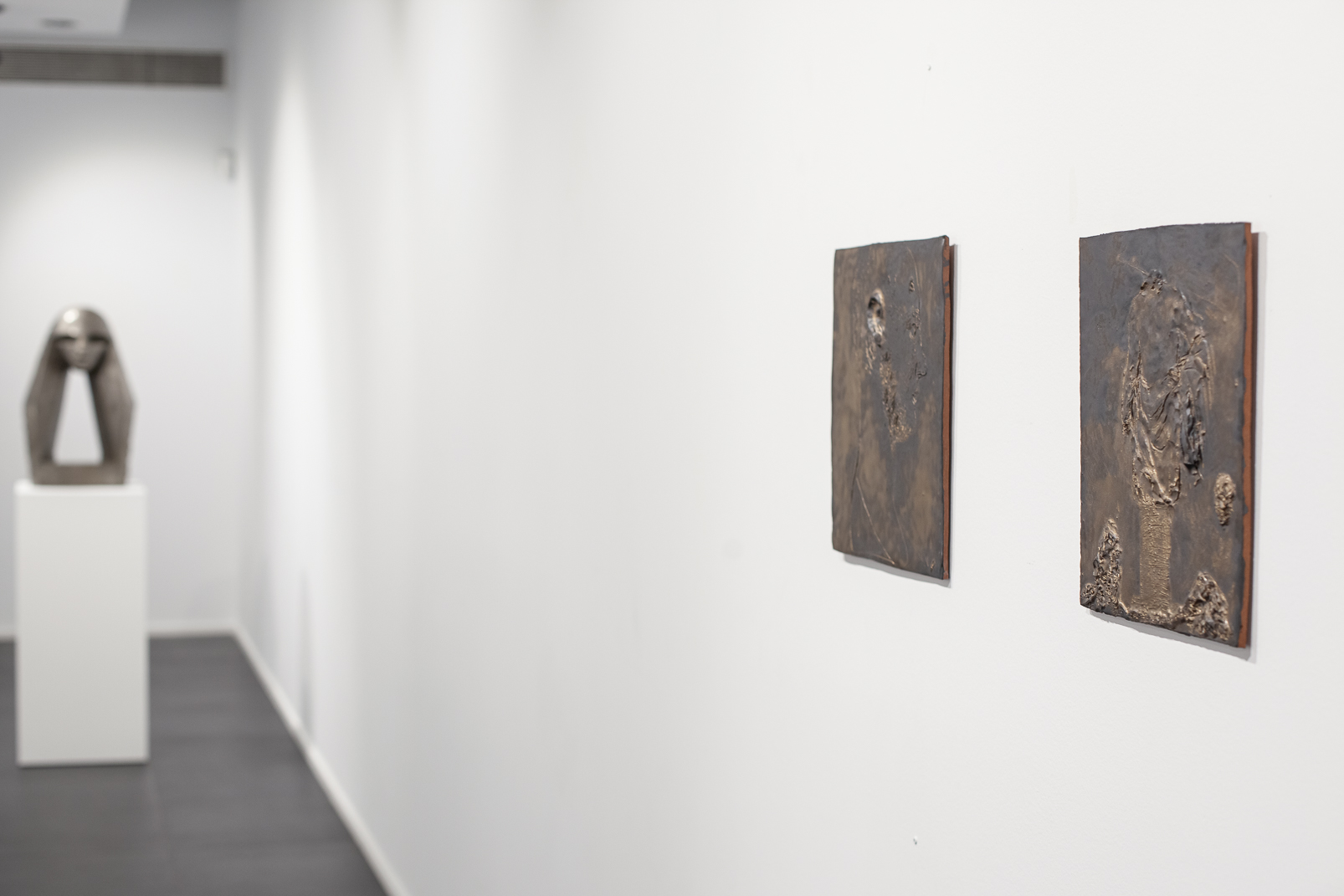 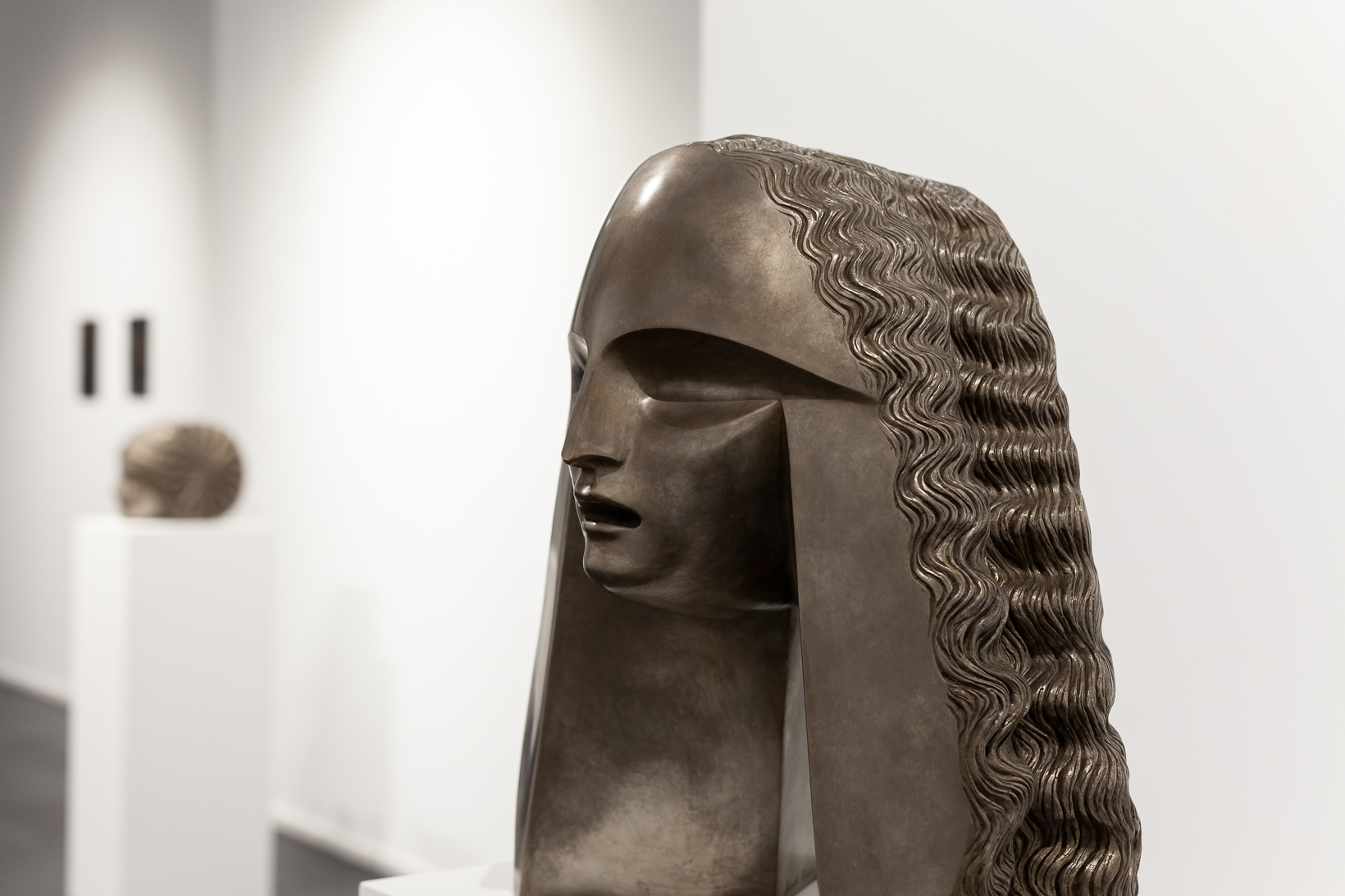 Fahrenheit Madrid is pleased to announce an exhibition of bronze sculptures by New York-based artist Sarah Peters. Her work can be seen as an amalgam of antiquity, modernity and even futurity, as she uses the imagery of gods in a humanistic context. Peters’ sculptural language draws from diverse iconographic influences including Assyrian antiquities, Greco-Roman tragedy masks, Egyptian funerary figures, Cypriotic portraits, as well as early American folk art and early modernist figuration. The Lady of Elche was a particularly important reference for this exhibition.

The sculptures’ reduced and refined facial features bestow them with a celestial presence: hollow eye sockets and wide-open mouths confer juxtaposed notions of idealized death and life. The polished silver nitrate surfaces with their flat, sliced, sharp planes further reinforce their status as androids or messengers from another world. Her sculptures explore the universal elements of what can be a parallel world of possibilities, the relationship between essence and existence.

Peters subtly allocates “seer” characteristics to her sculptures by elongating their eyes and mouths. The complex dimensions of meaning cleverly conveyed through her work entrance the viewer into a heightened state of appreciation. In both “Charioteer I” and “Charioteer II”, the artist’s hand is apparent in the woman’s wheel-like hair, seemingly essential for navigating her world. The wheels express positive and hopeful movement into the future. The faces in “Augur 1” and “Augur 2” are intentionally elevated from the base (the loose and long hair) making them instantly recognizable as authoritarian, powerful and eminent figures, gifted with powers to interpret natural phenomena and a special connection to the divine.

The ceramic wall reliefs distort the images of classicism and narrative mythology. The pieces are immediate and fun and highlight the practice of drawing whilst responding to subtle variations in the surface. The artist focuses on the spontaneity and playfulness of storytelling and minute details convey unique narratives that indicate a mastery of the sculpting hand.

Peters dances between what can be considered mysterious, archaic and modern without risking the unique element of each of her pieces. Her sculptures pave their own path and ultimately speak to us in a time-transcending language of their own.

Sarah L Peters (b. 1973) is currently in Queens, NY. Peters received her (MFA) in Virginia Commonwealth University, her (BFA) in the University of Pennsylvania, and (Certificate) from The Pennsylvania Academy of Fine Arts. The artist has been in residencies from John Michael Kohler, WI and New York Foundation for the Arts (NYFA), NY (2011); The Fine Arts Work Center, Provincetown, MA (2010); and The Marie Walsh Sharpe Art Foundation Space Program, Brooklyn, NY (2008). Peters has had a solo and two-person exhibitions include Halsey McKay Gallery, New York, NY (2017); Eleven Rivington, New York (2015); 4 AM, New York (2015); Bodyrite (with Mira Dancy) at Asya Geisberg, NY (2014); Edward Winkleman Gallery, NY (2007,2010); and John Davis Gallery, Hudson, NY (2013). Group exhibitions include Objects Like Us, The Aldrich Contemporary Art Museum, Ridgefield, CT, curated by Amy Smith-Stewart and David Adamo (2018); Galerie Eva Presenhuber, Zurich, Switzerland (2018); and Rodin and the Contemporary Figurative Tradition, Frederik Meijer Gardens & Sculpture Park, Grand Rapids, MI (2017), among others. Her work has been reviewed and featured in publications such as The New York Times, Art in America, Artforum, and The Brooklyn Rail.