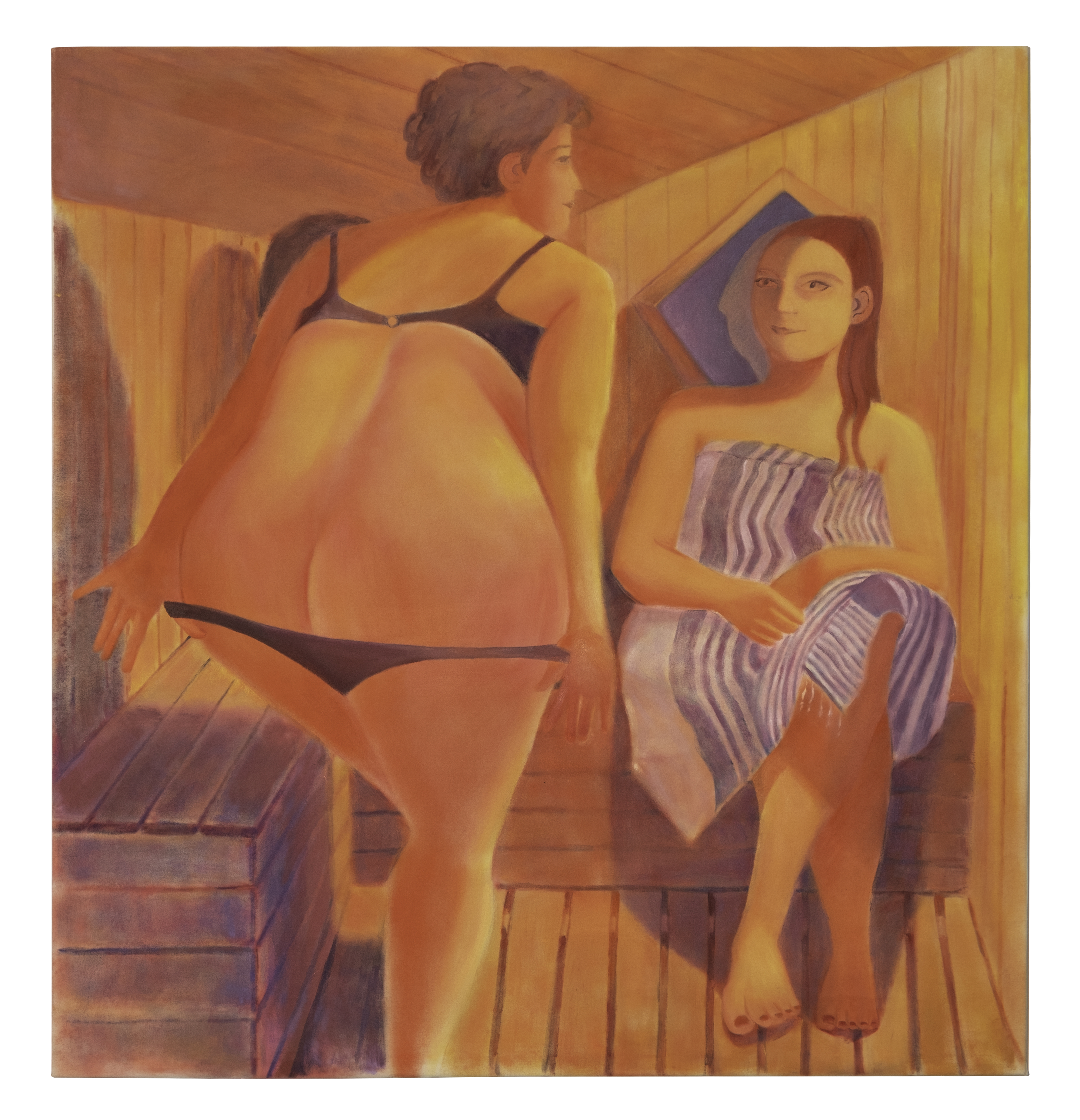 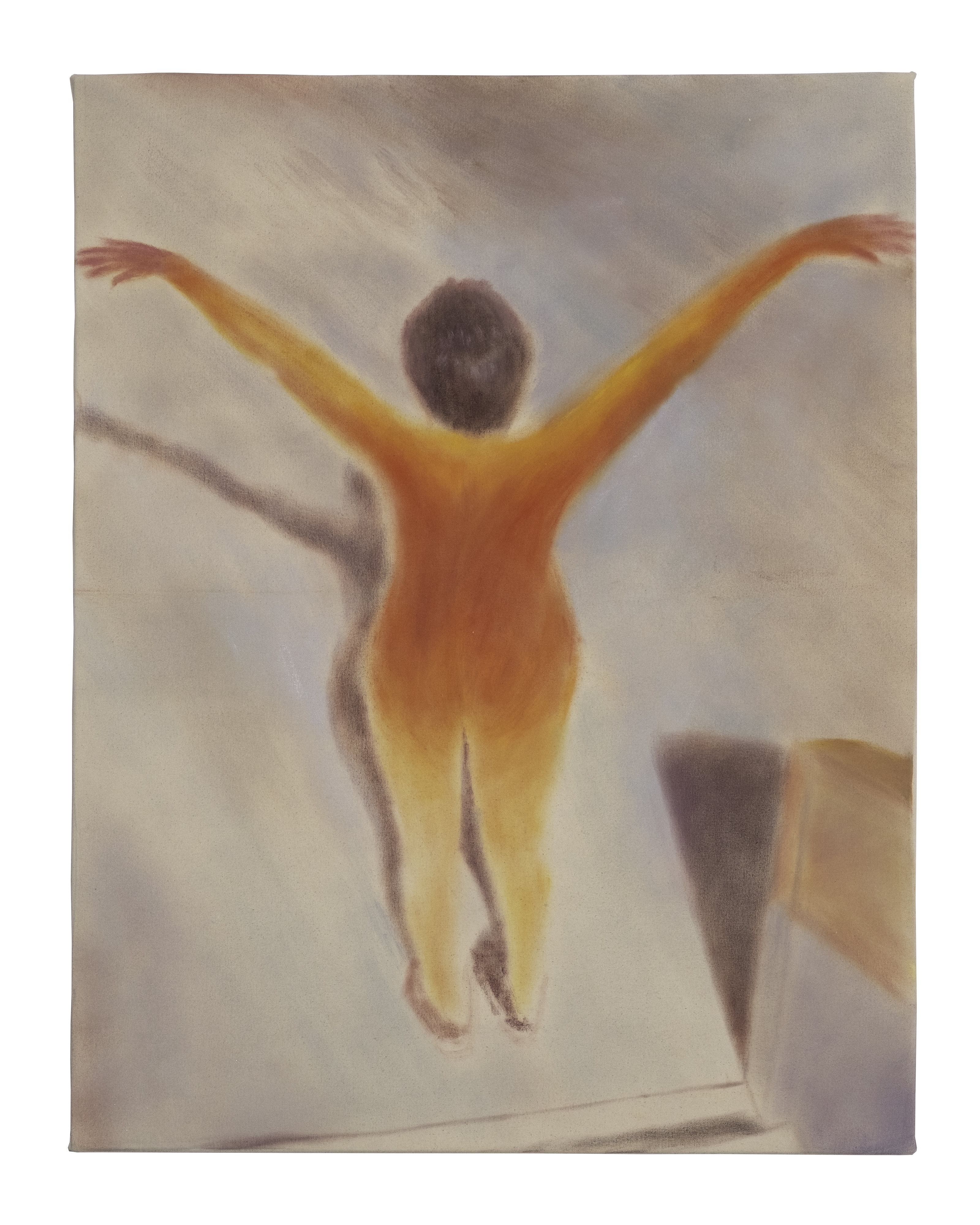 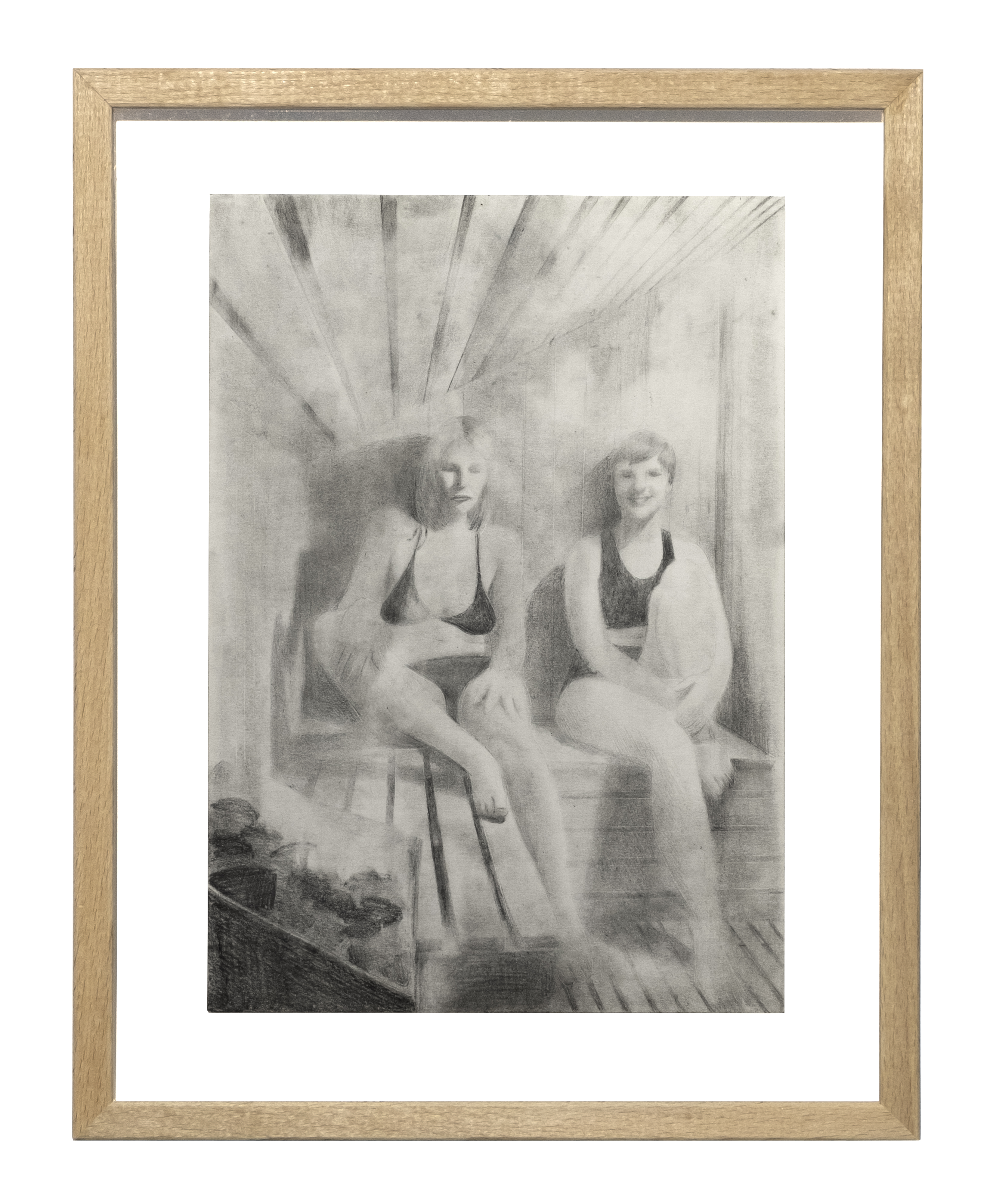 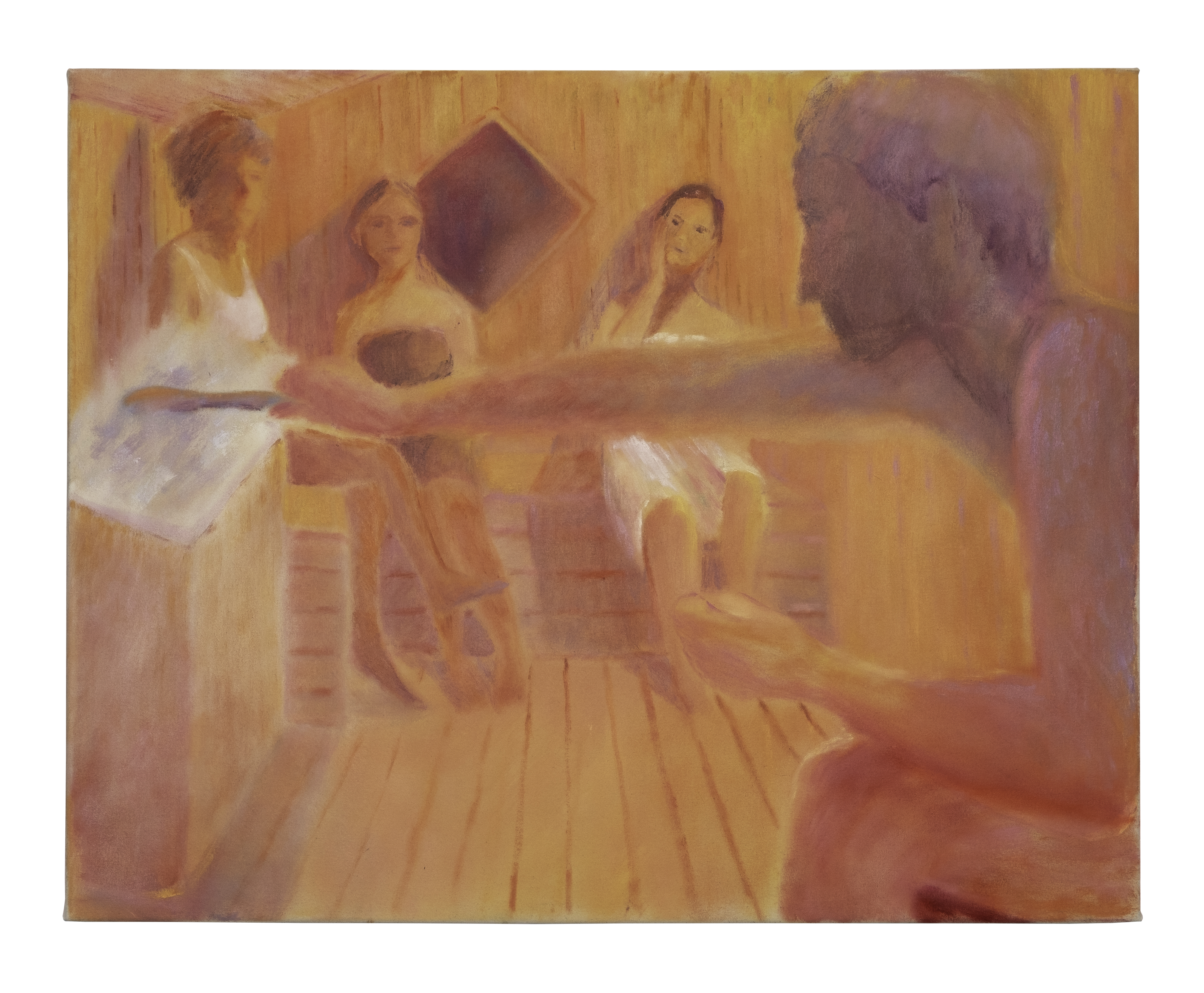 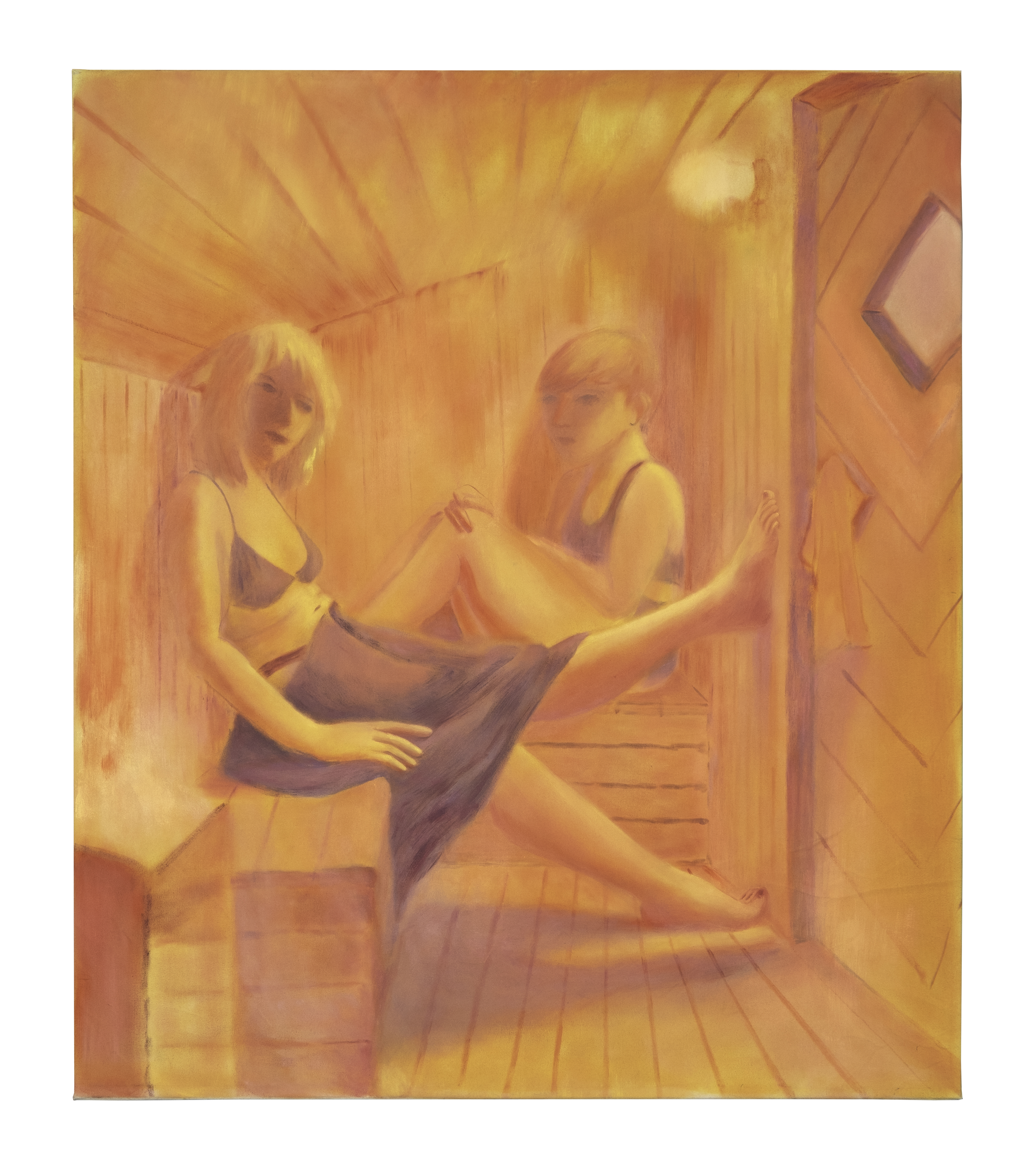 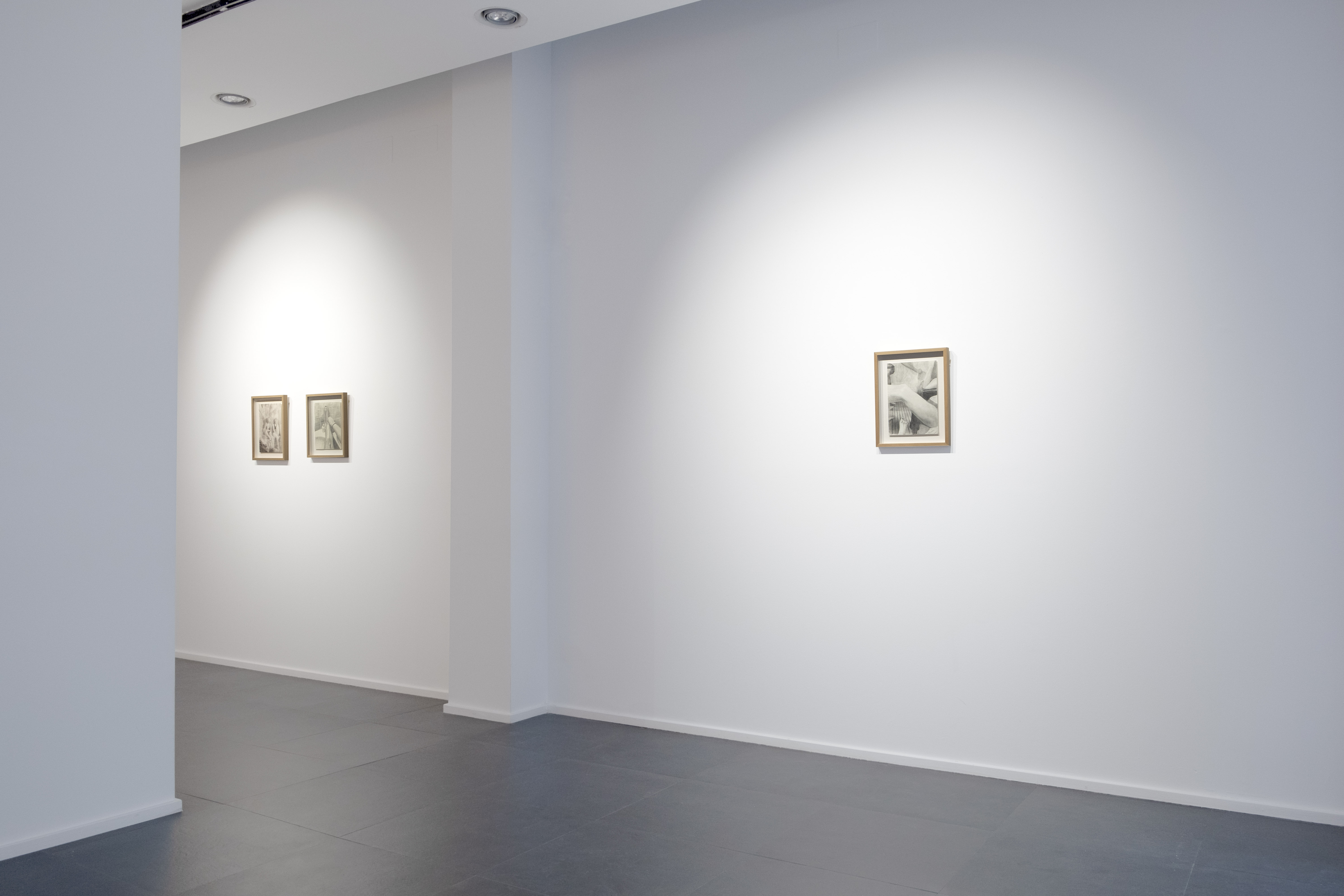 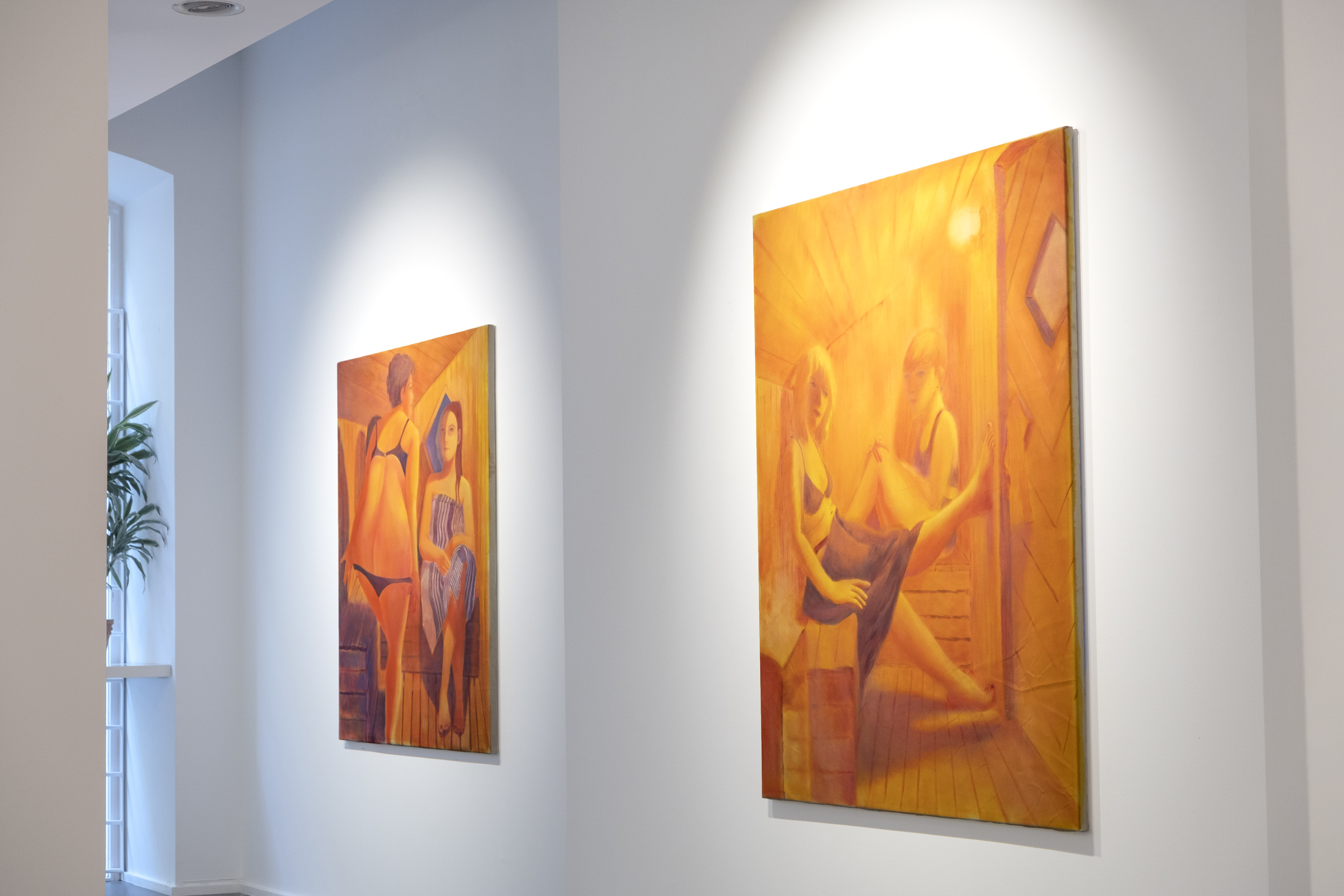 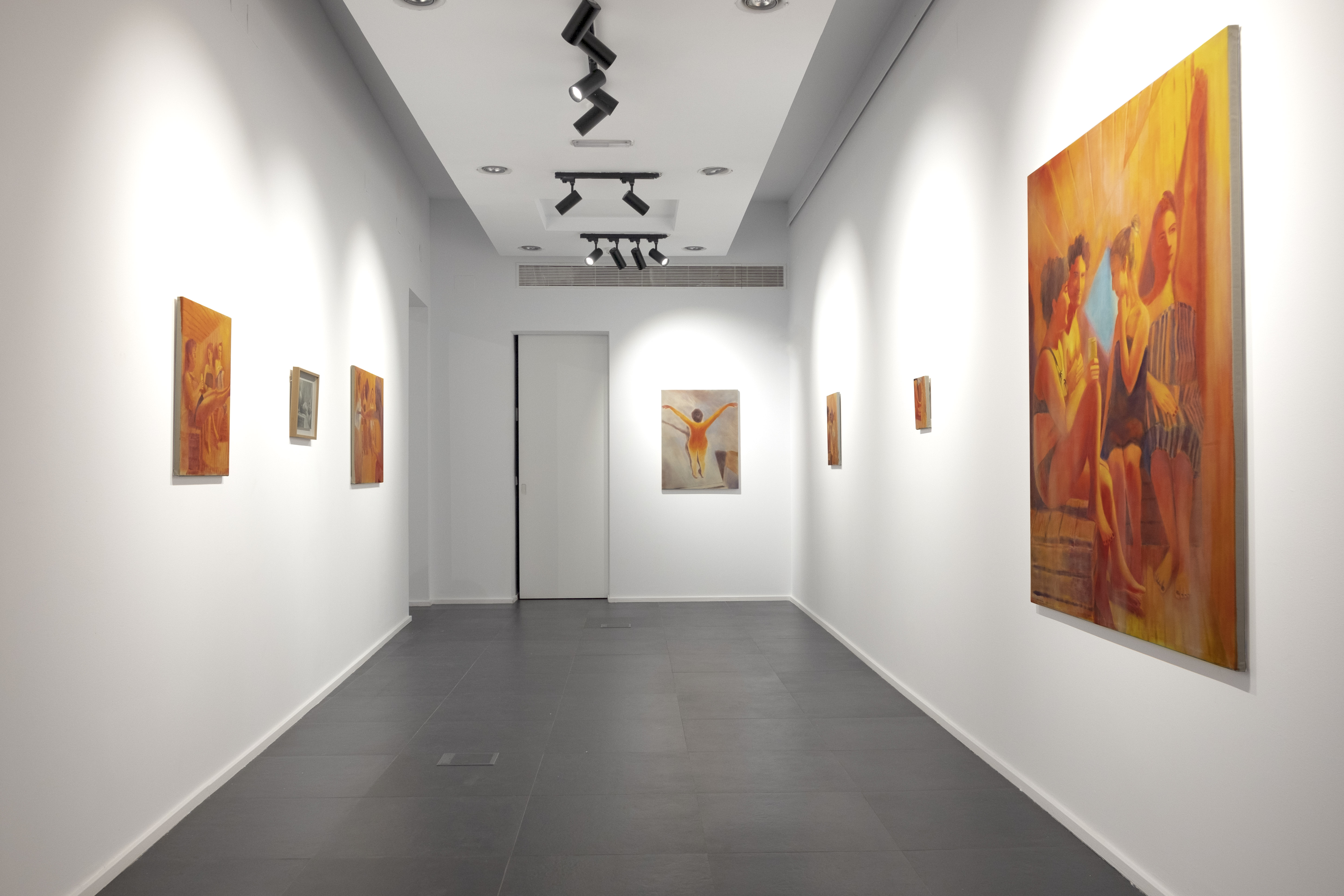 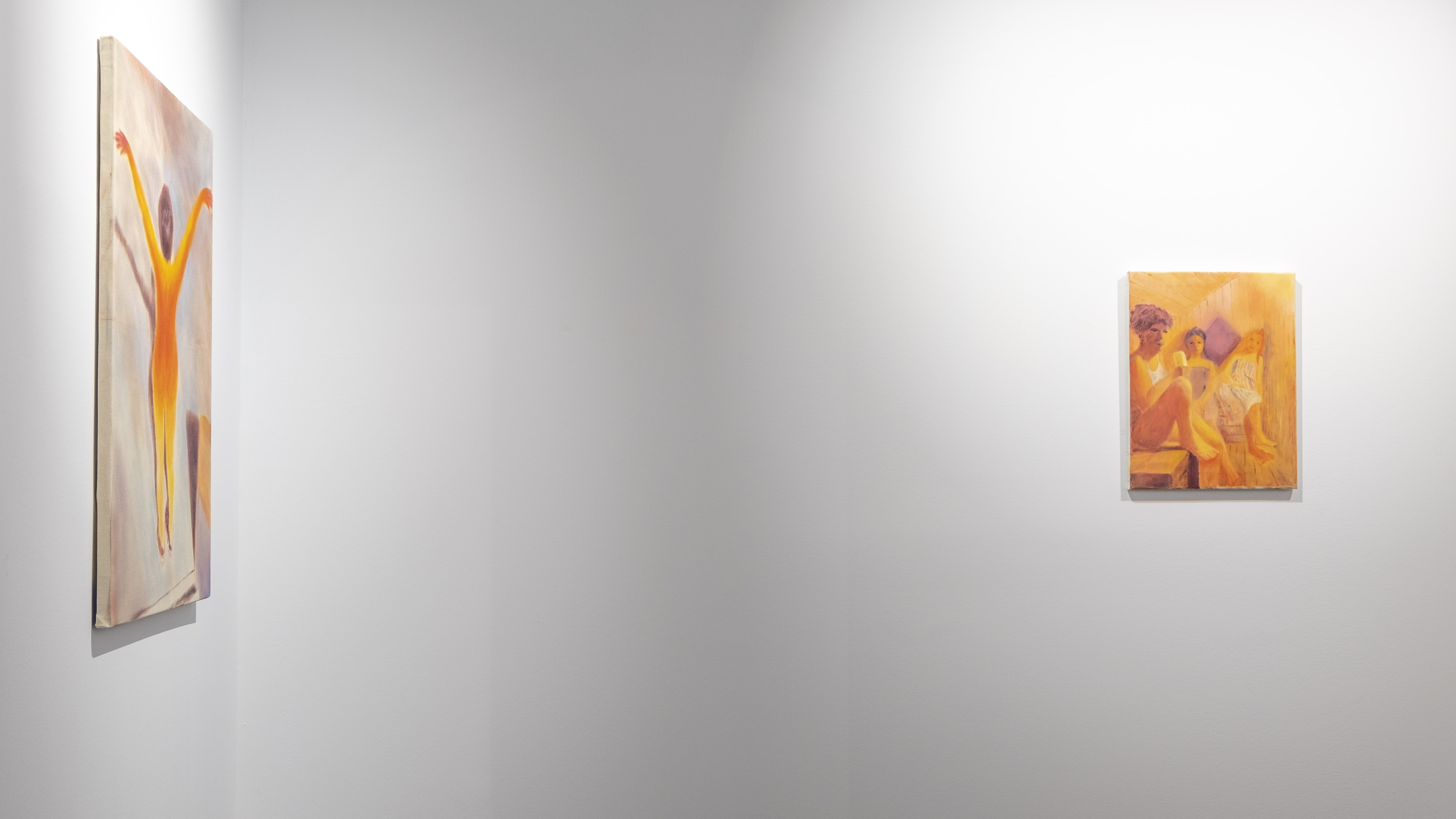 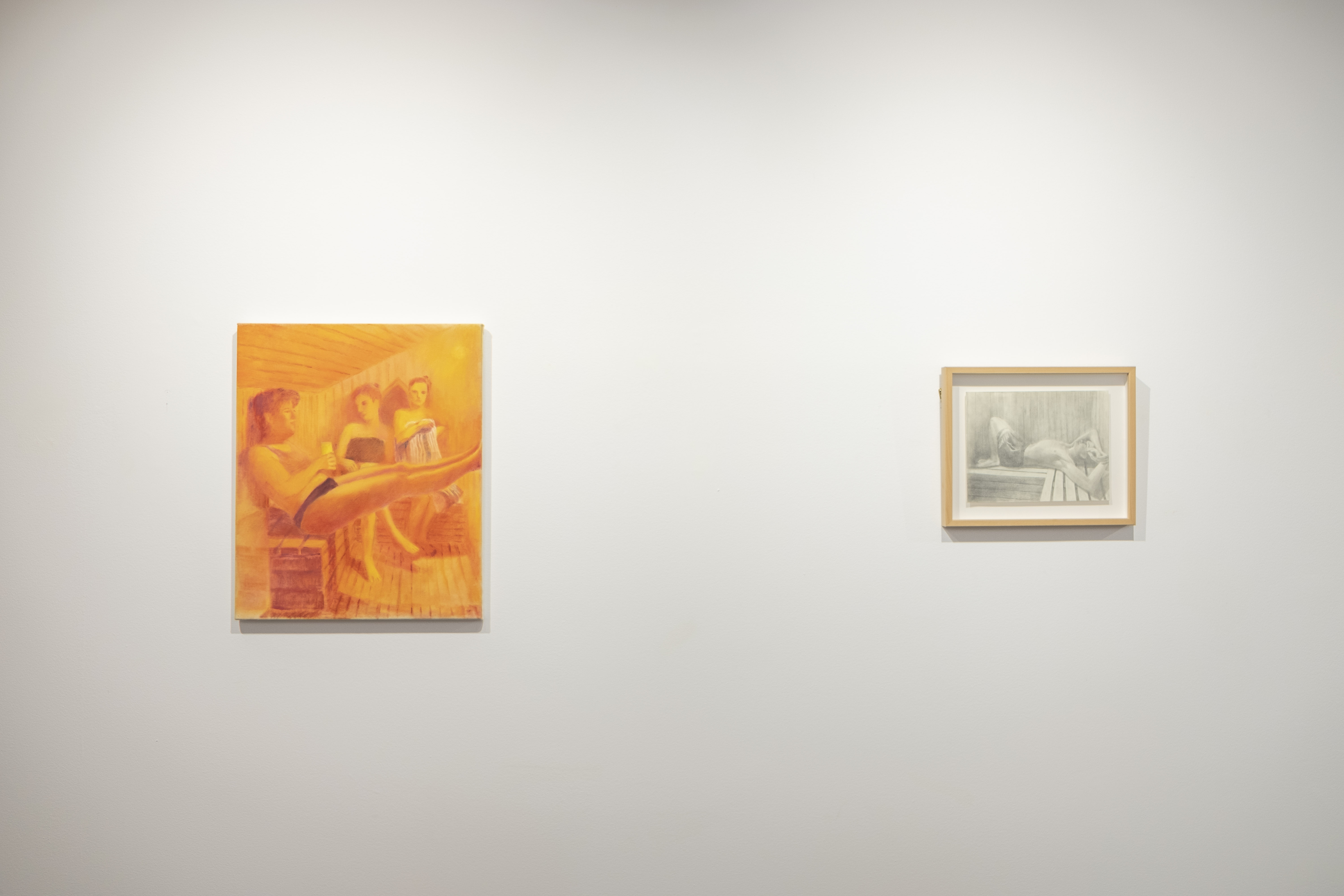 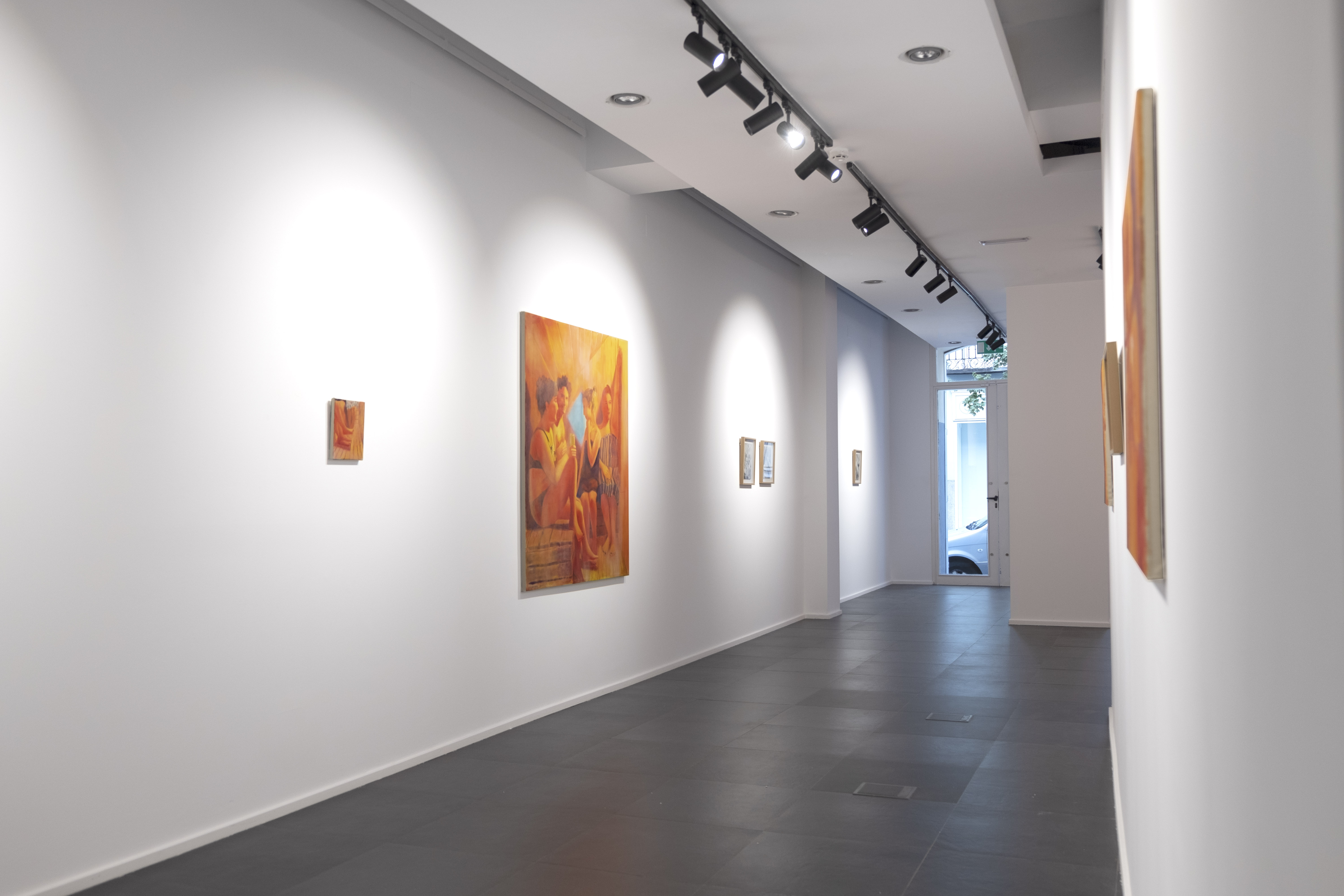 The inspiration for this series of sauna-based artist portraits, part of a larger body of work, came while attending an artist residency in Iceland in March 2019. It was there that I first learned about the concept of hygge, which essentially means “coziness” in Danish. In Nordic countries where winters are long, cold, and dark, the inhabitants of these northern countries have developed coping skills that help them stay fortified during the most challenging season. I was facinated in particular by the rituals of saunas and hot tubs as vehicles for self-care, as well as how these sites are spaces for making connections and socializing within the community.

The title Winter Woods refers to the wood planks that make up the structure of the sauna and that are responsible for creating the warm lighting that is pervasive throughout the images. In most of the paintings, the lines of the wood act as the backdrop to the unfolding dynamics between the artists/models. The wood frames of the sauna serve as an analogy for the wood frames that create the structure of the paintings, and in a broader sense the history of painting, where the traditions and tropes of the medium are enacted and challenged.

As part of my larger series of artist portraits, this work seeks to examen and conflate the historical binary of artist and model, as well as the traditional gender dynamics that have inhabited those roles. By painting images of artists participating in the act of self- care, I am able to depict subjects that are in contrast to the typically passive, female muse of historical odalisque paintings.

The paintings and drawings in this series are constructed from photographs that I take in collaboration with my subjects. I aim to present my models in a way that gives them agency - as sensual, thoughtful, aware of their own desires and needs, creators, and consumers in their own right - and not just existing as the object of someone else’s fantasy. I am also interested to see how tenuous that distinction is as more audiences are exposed to the imagery and project their own value systems onto them.

Is it possible to make work that falls outside the patriarchal gaze of capitalism? I don’t believe that it is, but I hope to work within the existing system of to negotiate a space for humanity to exist, more or less uncommodified.

Sarah Thibault was born in Minneapolis, Minnesota (b.1980). Currently, she lives and works as an artist and writer in San Francisco. Her work has been shown in the United States, Europe, and Mexico. Exhibition experience includes projects with the Berkeley Art Museum and Pacific Film Archive, Interface Gallery, HILDE Gallery, Steve Turner Contemporary, Mark Wolf Contemporary, and ART in Embassies. Her work has been featured in The San Francisco Chronicle Datebook, Artsy, CARLA, San Francisco Magazine, SFAQ, The Examiner, The Huffington Post, and 7×7. She is the founder of the online publication Artists + Travel and a Charter Resident of the Minnesota Street Project studios since 2016. She holds an MFA from the California College of the Arts, a BFA from the San Francisco Art Institute, and a BA from the University of Wisconsin- Madison.